Chengdu has its fair share of museums, historical sites and ancient temples – and of course, Chengdu has a Zoo where you can also see real pandas – but what really distinguishes the city, culturally, is its opera, which is part of the Sichuan Opera tradition, one of China's oldest regional operas.

Chinese opera is unlike Western opera in a host of ways, but mainly in the fact that it rarely involves start-to-finish, plotline dialogue and/or monologue (except for Beijing Opera), but instead consists of several component parts that involve circus-like stunts (acrobactis, fire spitting, clowning, etc.) as well as dramatic, story-telling parts which, like opera everywhere, are sung.

However, Sichuan Opera is especially characterized by its circus-like elements, where the actors are either consummate acrobats, consummate magicians (illusionists), consummate fire spitters or consummate clowns, besides another category of consummate performers in which the city of Chengdu absolutely excels: the dazzling art of face-changing, which involves the uses of multiple (layered) masks that can be changed at lightning speed.

Sichuan opera (Chuan Ju ,Sichuanese Opera) is one of China's oldest and most popular opera forms. Originated at the end of the Ming and the beginning of the Qing Dynasty, different dramas were brought in to blend with the local dialect, customs, folk music and dances. Today’s Sichuan opera is a relatively recent synthesis of 5 historic melodic styles. 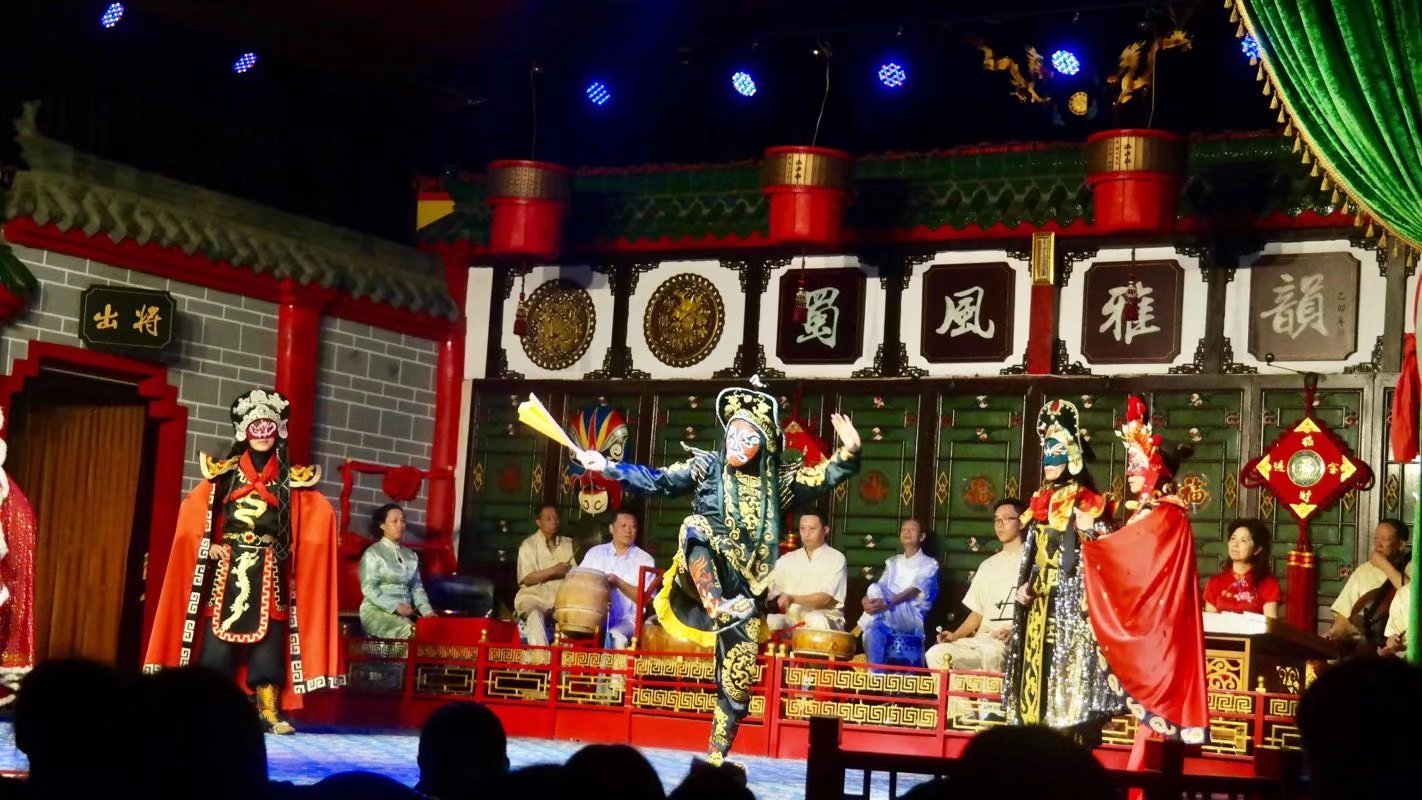 The History of Sichuan Opera

As one of the major schools of opera in China, the Sichuan Opera has a long history. It originated about 400 years ago at the end of the Ming Dynasty and the beginning of the Qing Dynasty. At that time, there were several different forms of popular theatre in the Sichuan area which gradually developed and blended to emerge as the present Sichuan Opera.

They also wear vividly colored masks that they may change within a fraction of a second. The magic stunts such as quick face changes without makeup and the acrobatics such as jumping through burning hoops and hiding swords entertain and amuse audiences. The magical face changes are particularly famous.

It is said that ancient people painted their faces to drive away wild animals. Sichuan Opera take in this ancient skill and perfects it into an art. Artistes in traditional costumes dance around, flicking their heads up/down or back/forth in an instant, changing the thin painted masks over their face. They do this it so quickly, and so frequently, you will be left amazed at how they could control the masks so skillfully. 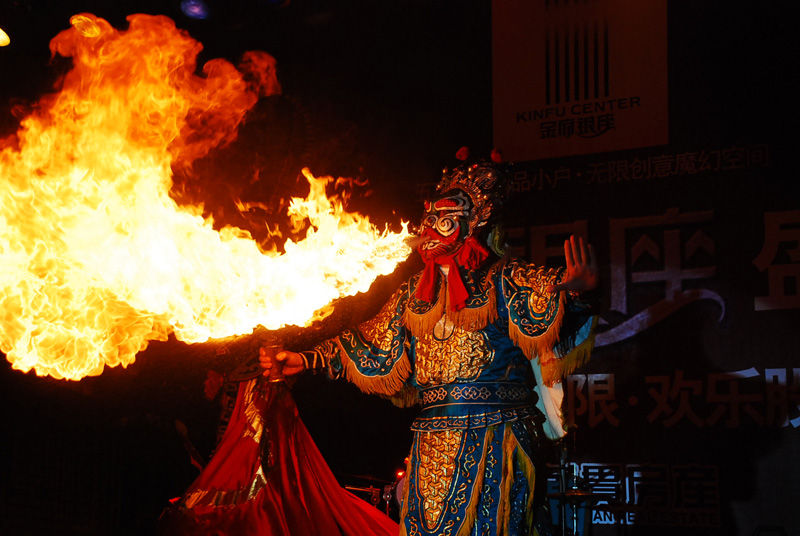 The History of Face-Changing

Face changing, or bianlian (变脸 /byen-lyen/) in Chinese, began about 300 years ago during the reign of the Qing Dynasty Emperor Qianlong (1736-1795). It is an important aspect of Sichuan Opera, and the precise techniques that are used to change masks in modern Sichuan Opera is a closely guarded secret. The secrets have been passed down within theatre families from generation to generation.

At the beginning, the color of performers' faces changed through the means of powder blown from bowls of colored powder. The powder would adhere to their oiled skin. Another method was to smear their faces with colored paste concealed in the palms of their hands. Red represented anger, and black represented extreme fury.

By 1920, performers were using layers of masks made of materials such as paper. Skilled performers peeled off one mask after another.

In contemporary opera, performers wave their arms and twist their heads, and their painted masks are changed again and again, much to the astonishment and amusement of the audience.

Modern day performers use full-face painted silk masks, which can be worn in layers of as many as twenty-four. Skilled opera stars can change about 10 masks in 20 seconds. It is amazing to watch actors change their masks with a magical sweep of a hand or the turning of the head. It is difficult to see the masks being changed.

But Chengdu's opera is more than its circus-like elements, there are also elements that follow the story-telling tradition à la Beijing Opera, involving dramatic acting, often with interludes performed by a solo artist, combined with very specific symbolic movements – sometimes involving specific props – that have a long history of meaning in Chinese culture.

All of the circus-like components of Chengdu's opera are accompanied by appropriately dramatic music, often involving a number of wind- and percussion instruments, punctuated by shrill shrieks. 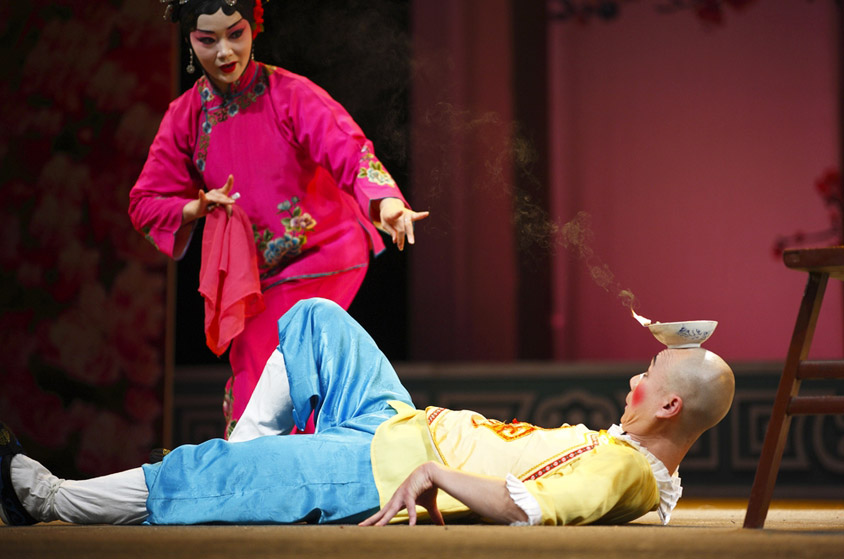 Many tea houses in and around Chengdu stage shorter opera performances of this nature, which can almost be compared to puppet theatre, but where the puppets are real, live humans, and where the "puppeteer" is the script.

If you catch one of these opera performances in a tea house in Chengdu – or, indeed, at any of the other venues in Chengdu where opera is performed – rest assured that you will be provided an English-language pamphlet explaining the plot and the characters involved, in much the same way that you would be provided a similar pamphlet explaining the Italian-language performance of, say, La Primavera by Paganini at the New York Metropolitan Opera. 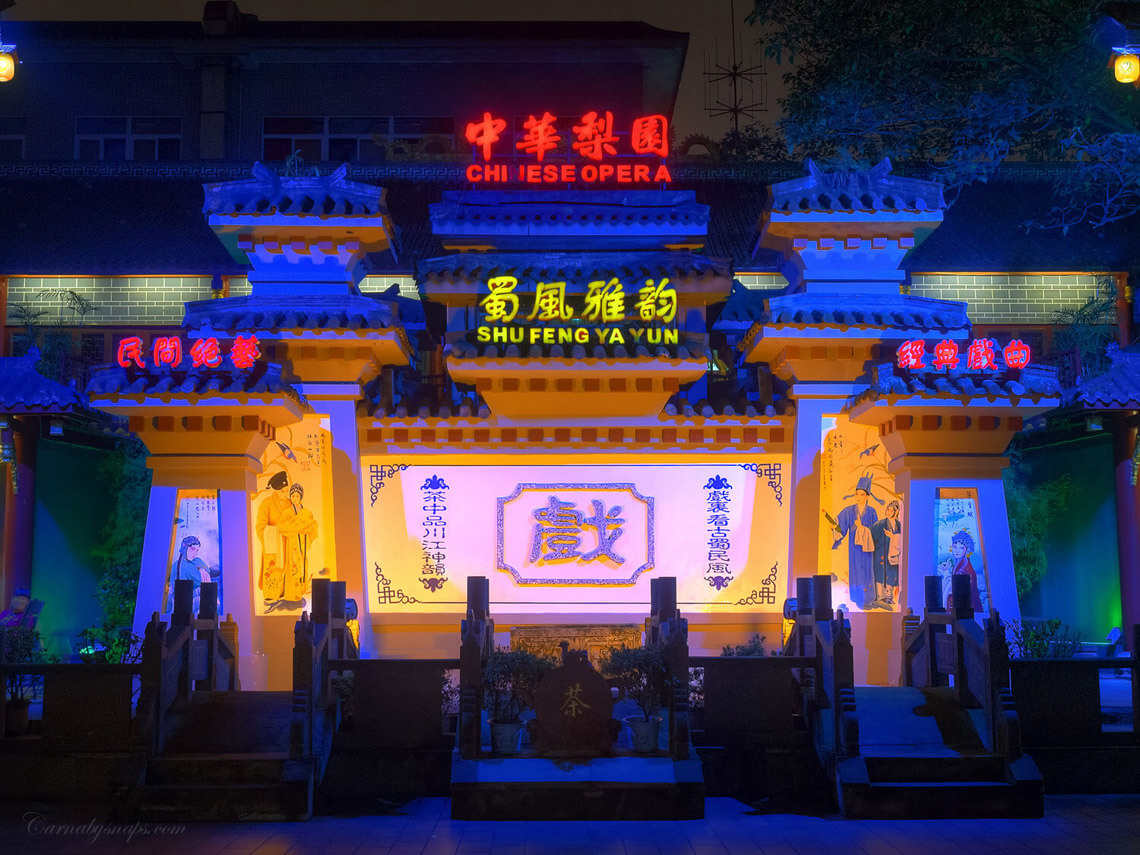