Top Things to do in Shanghai

Shanghai is one of the most populous cities in the world with a population of about 26.32 million as of 2019.The city has been dubbed the “showpiece” of the ever-growing economy of mainland China and is most famous for its impressive Lujiazui skyline, historic buildings such as the City God Temple, and its epic museums.

Here are top 10 things to do in Shanghai.

If you want to skip directly to any Shanghai Attraction, click on the links below.

1.Walk Along The Bund

Also known as Zhongshan Dong Yi Lu (East Zhongshan 1st Road) the Bund is located on the west bank of the Huangpu River. 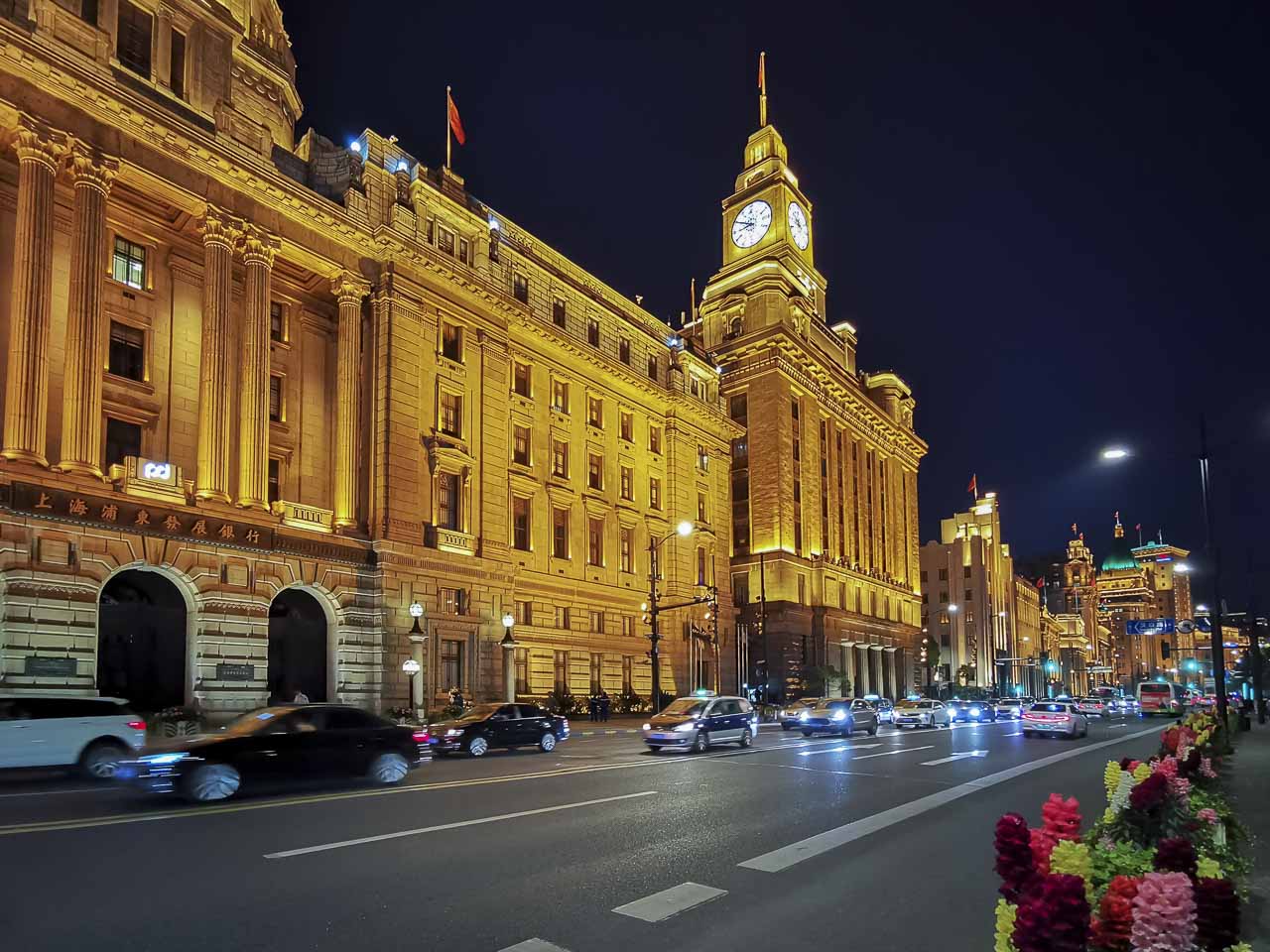 It is famous for its waterfront view of Pudong, the financial district across the river.

At night the lights go on showcasing an incredible view of the city skyline.

The Bund is a 1.5 km long stretch of colonial buildings lining the waterfront.

The walking path follows the river and is spacious and wide offering excellent views of Pudong on one side and the colonial buildings dating back to the early 1900s on the other.

Try to pop into one of the colonial buildings. Some are open to the public housing banks and hotels. It's worth checking out the lobbies of the buildings to see the intricated designs.

MUST-SEE SIGHTS AT THE BUND

The Bund also has an array of city sculptures. 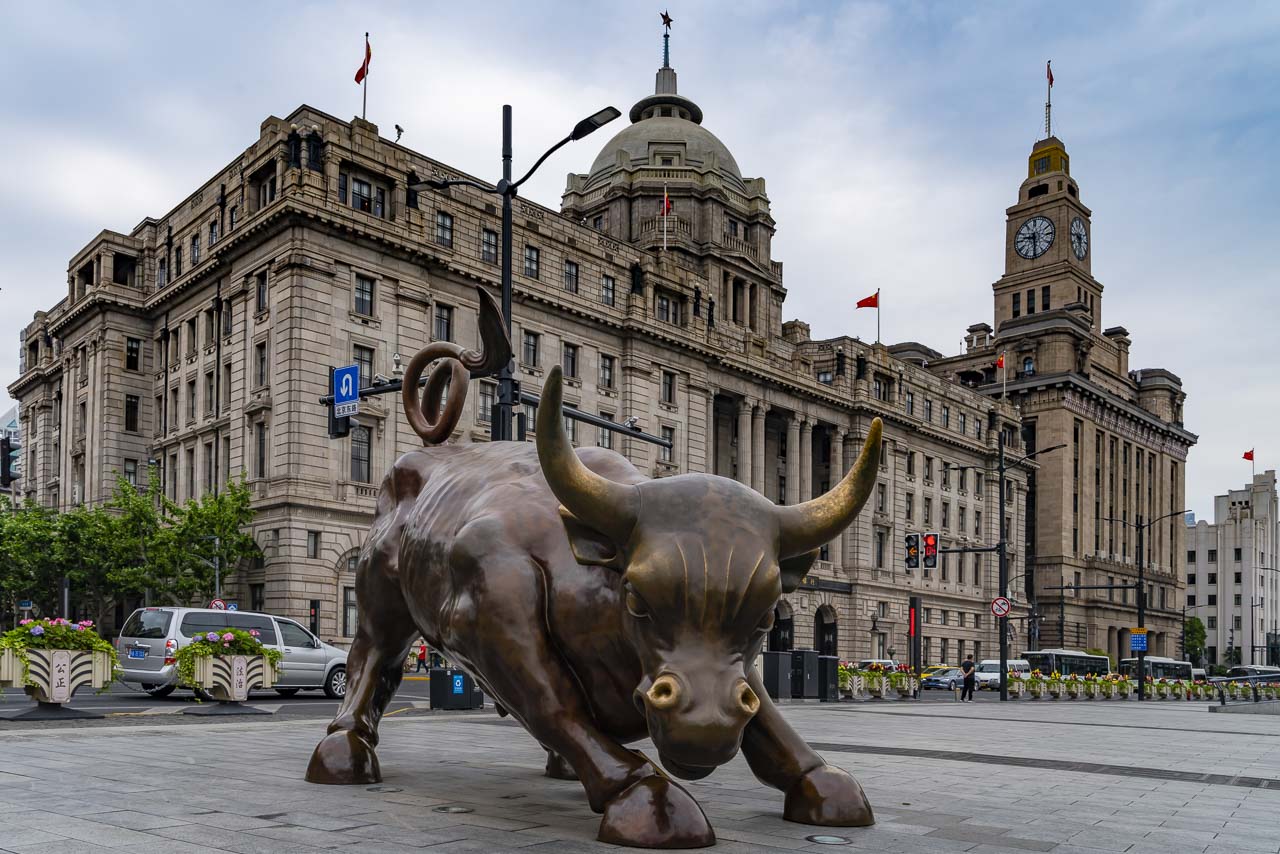 A bronze statue of Chen Yi, who was the first Communist mayor of Shanghai, stands at the Nanjing Road intersection near the Bund.

The Bund has its own wall street bull just like New York City,  boasting its leading standard in the world financial market.

Along the northern end of the riverfront is the Huangpu Park where the Monument to the People’s Heroes is mounted. It's a tall, abstract concrete tower and a memorial for those who lost their lives during the revolutionary struggle for Shanghai. 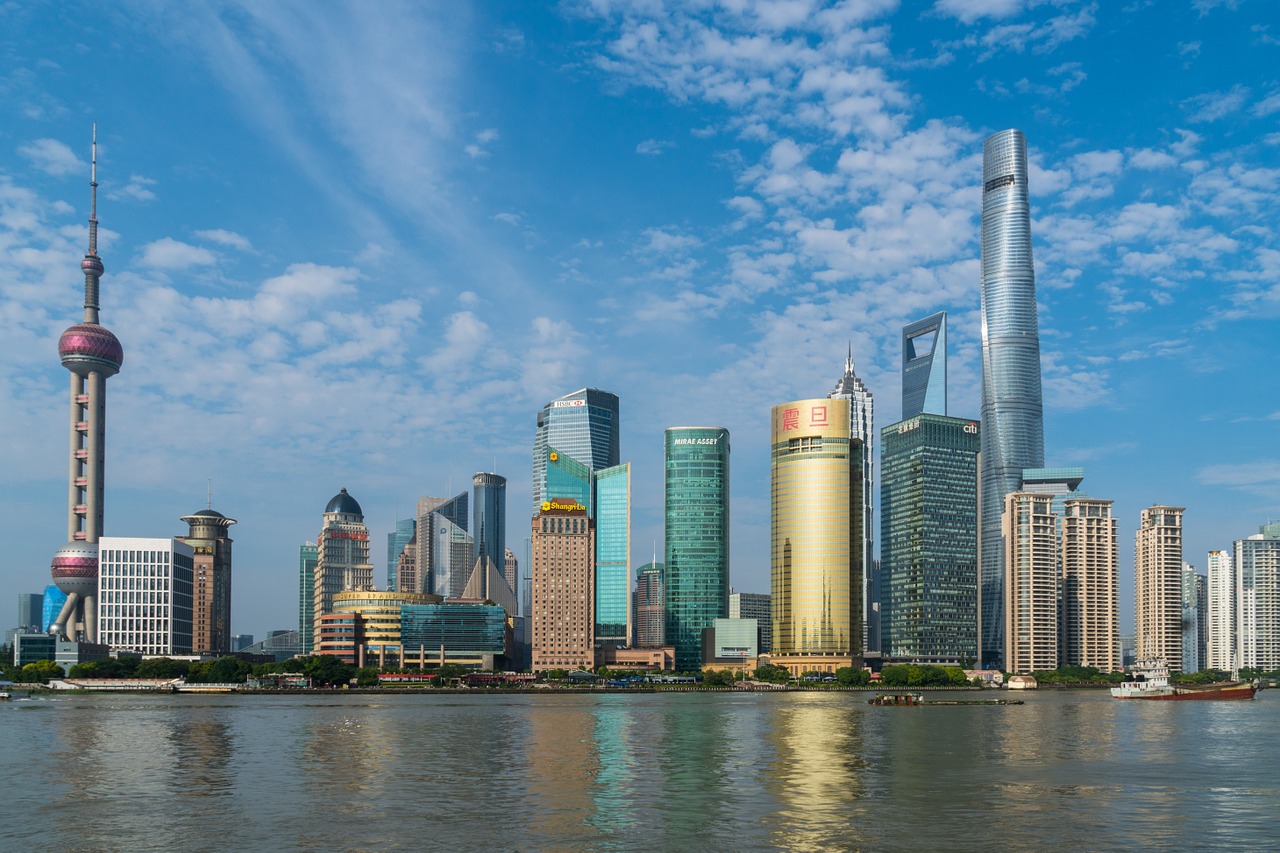 Pudong is Shanghai's financial district located across from the Bund on the Huangpu River.  It is filled with astounding and unique skyscrapers some of which are the tallest in the world.

Just a few decades ago it was mostly farmland but is now the fastest growing city on earth.

Here you can browse the high-end shopping centers located at the base of all the skyscrapers housing many observation decks.

It's easy to navigate around Pudong as there is an elevated pedestrian pathway between the buildings making it easy to walk from one skyscraper to the next.

Getting there: To get to Pudong, take the Metro Line 2 and get off at Dongchang Road Station. 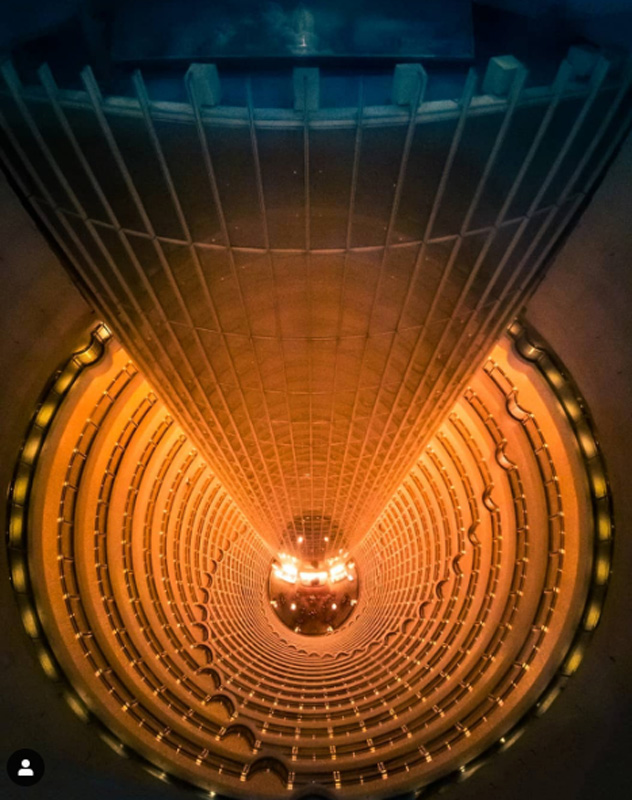 View down the center of the Jin Mao Tower

While the skyline views are awesome, it was the incredible view down the center of the tower from the 88th floor.

It looks like something out of a science fiction movie.

If you ever get to Shanghai, don't miss this. 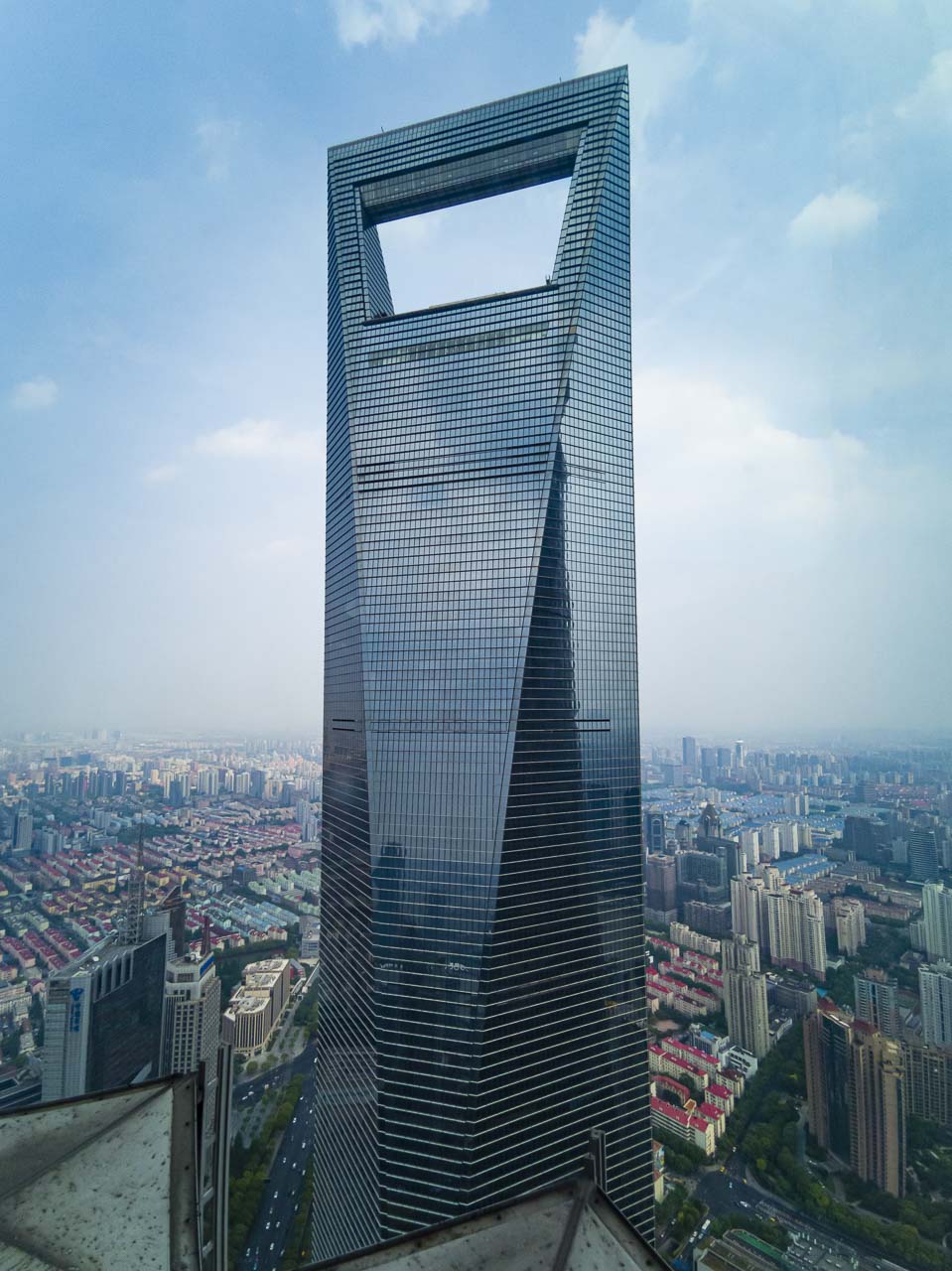 The Shanghai World Financial Center is the second highest building in the city and is one of its most recognizable attractions.

It the one that looks like a bottle opener.

The observation decks are located on the 97th and 100th floors.

It doesn't offer complete 360-degree views as you can only look out one side or the other. But it does offer good views of the Pearl Tower and the River.

There's a glass floor that is 55-meters long (60 yards) letting you see the top of the Pearl Tower.

If you prefer not to go all the way up to the observation deck, the Park Hyatt Hotel has a cocktail bar on the 87th floor where you can take in the view with a cocktail in hand. 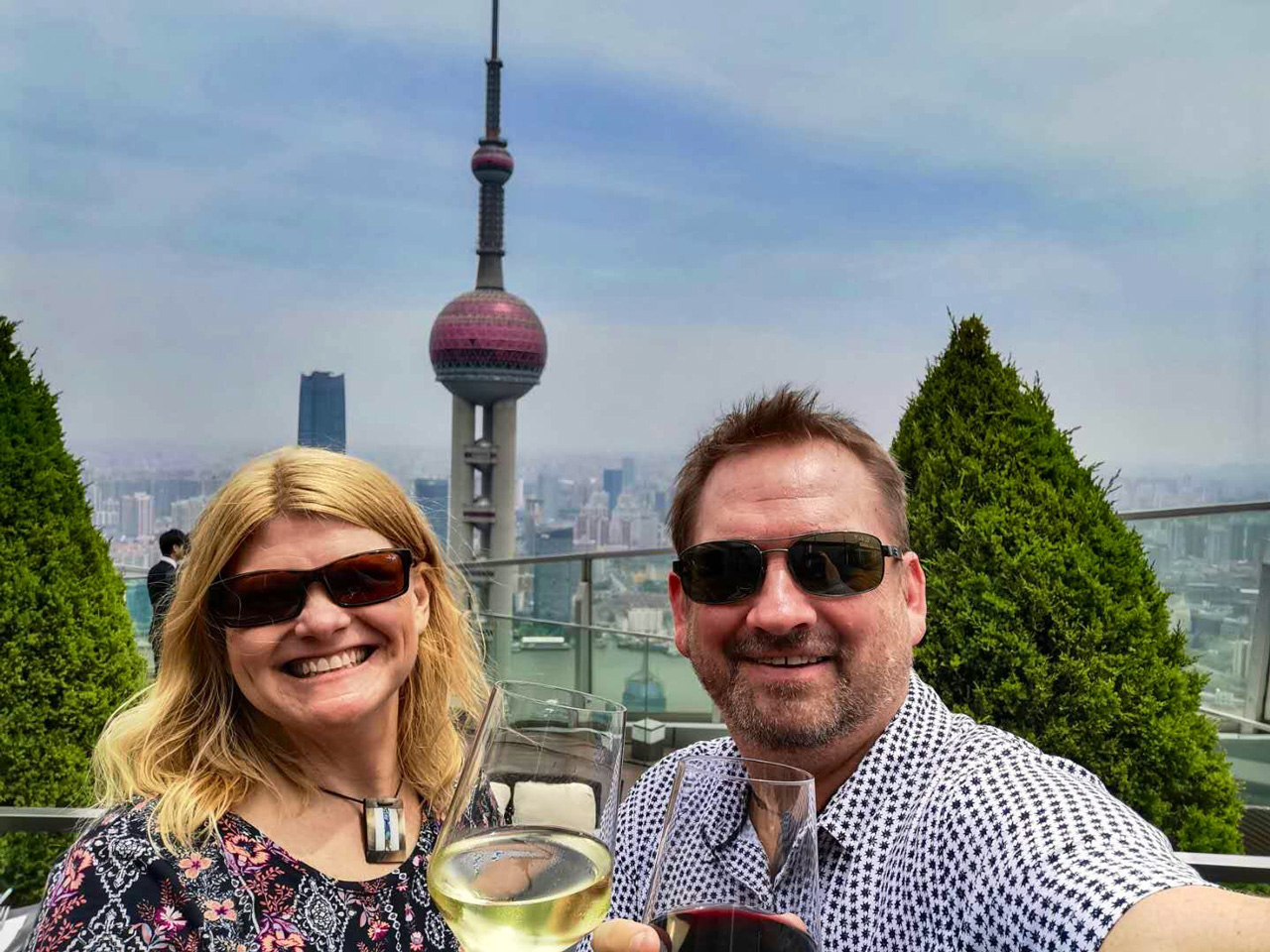 If you aren't into observation decks but still want a great view, the Ritz Carlton has a stunning outdoor patio where you can enjoy a cocktail overlooking the Bund and the Pearl.

It's a large observation deck and bar offering food and drink, and it was our favorite place to take in the city of Shanghai. 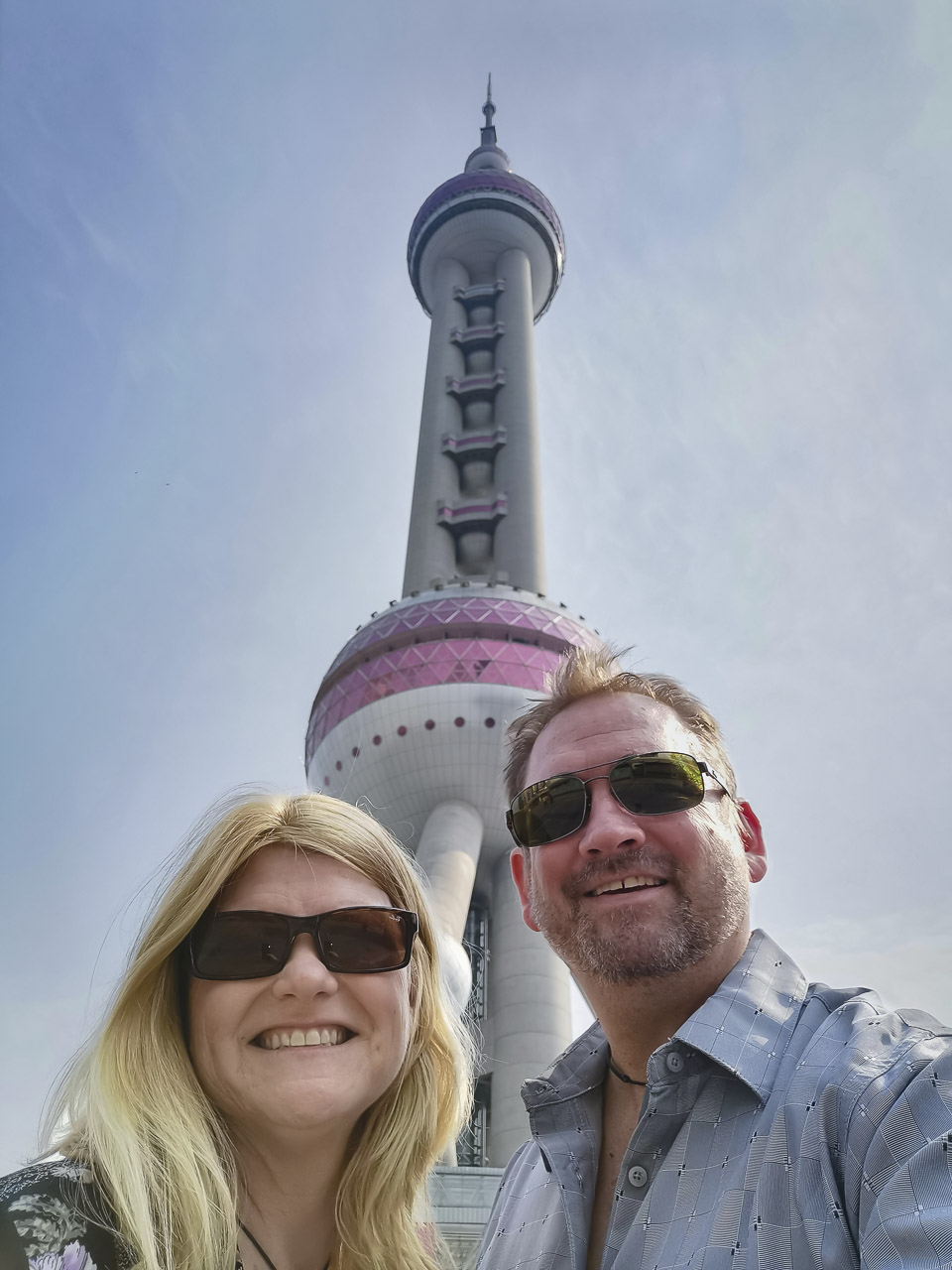 We don't recommend going up the Pearl Tower because in our opinion, it is the tower that you want to look at rather than look from.

But there is an observation deck here as well that lets you see views of the Bund and skyline.
back to top 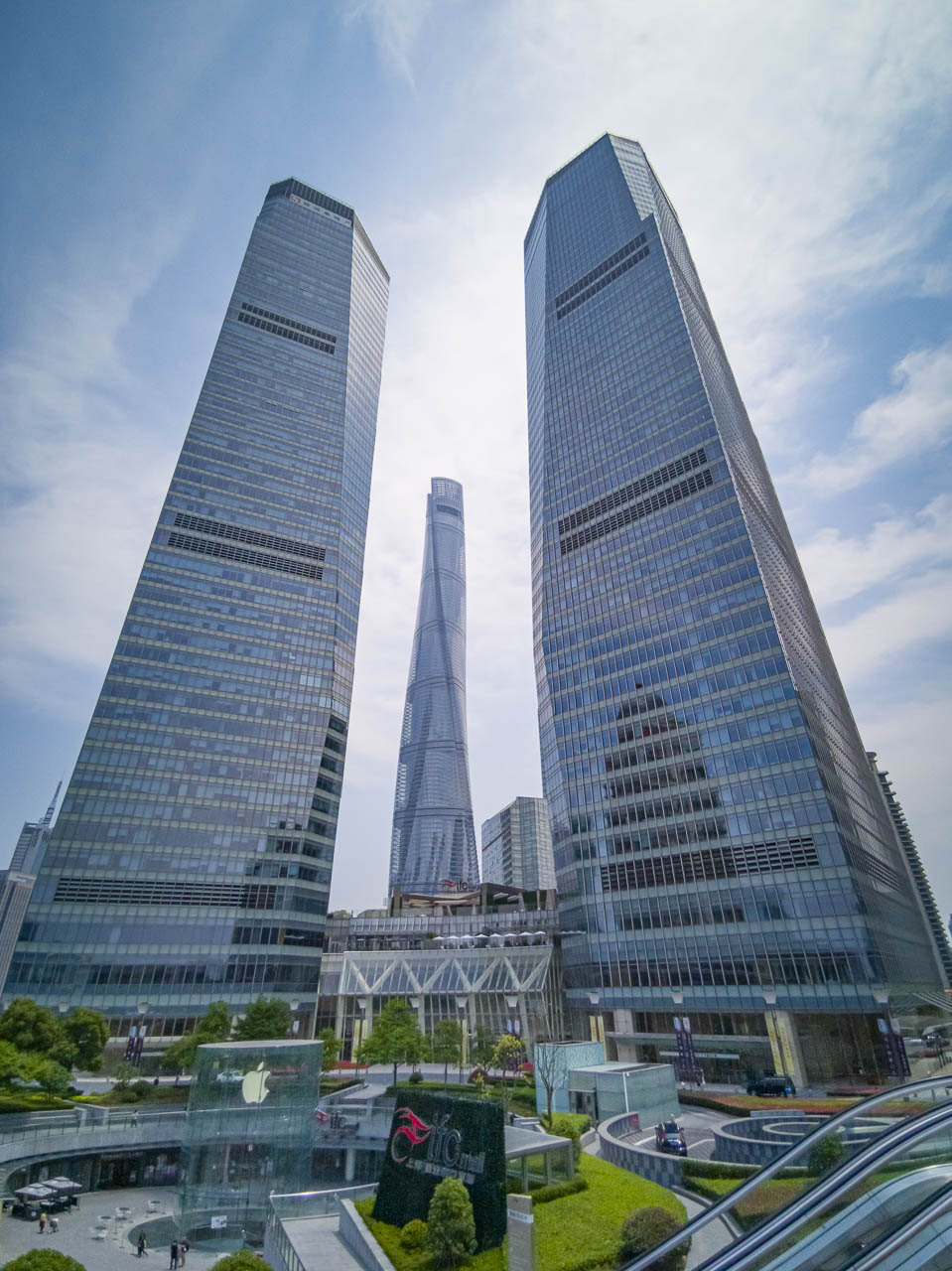 The Shanghai Tower is the tallest building in the city boasting the world's highest observation deck and the fastest elevators in the world.

There's an exhibit hall on the on B1 before you enter the tower where you can compare the high towers of the world before going up the high-speed elevator to the 118th and 119th floors.

All of these observation decks are walking distance from each other. Once you arrive in Pudong, you simply have to choose which one appeals to you the most and head inside. 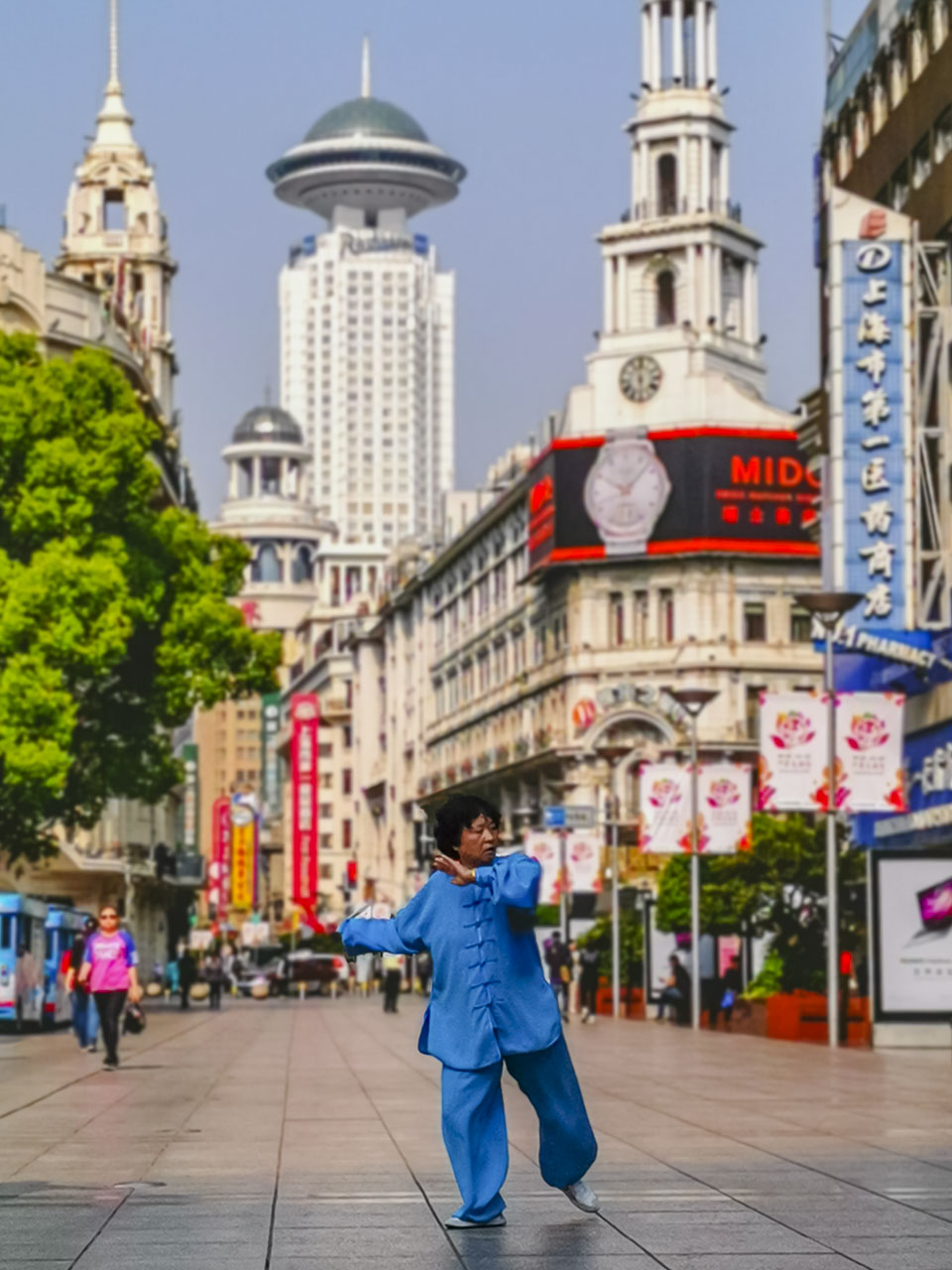 Nanjing Road is completely different during the day

Nanjing Road is a massive pedestrian walkway lined with high-end shops, eateries, and cafés. It is the city's main shopping street. There are two sections to Nanjing Road – West Nanjing Road and Nanjing Road East.

Nanjing Road West is the pedestrian walking street and Nanjing East is more of a commercial zone with restaurants and hotels.

It stretches from the Bund to the People's Square and you must take a stroll along it at both morning and night.

During the morning hours, elderly Chinese practice Tai Chi and dance in the streets. It's quiet and calm at this time of day and the perfect time to take in the sights with a coffee in hand.

At night, the neon lights turn on and it's a frenzy of people walking through the street. It's busy and hectic but not to be missed. 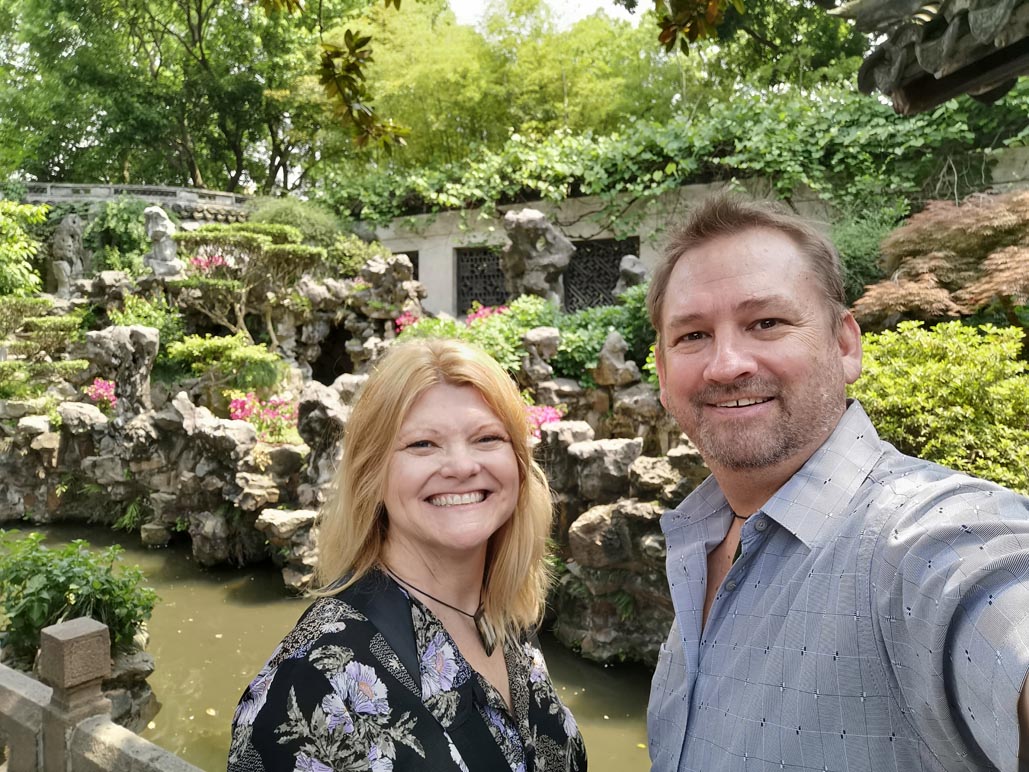 The Yu Yuan Garden is a lovely garden in the old city dating back to the Ming Dynasty of 1368.

It houses the usual elements found in a Chinese garden including rocks, water, plants, and pavilions.

It is very busy, so we suggest getting there early before the tour buses arrive.

Getting there: Line 10 to the Yu Yuan Gardens stop. It is just two stops from the People's Square. The main subway hub in Shanghai.

We bought tickets on the Hop on Hop off Bus our first day in Shanghai and took in the sights this way. It dropped us off at the Yu Garden Shopping street and when we were finished, we hopped back on to our next destination. 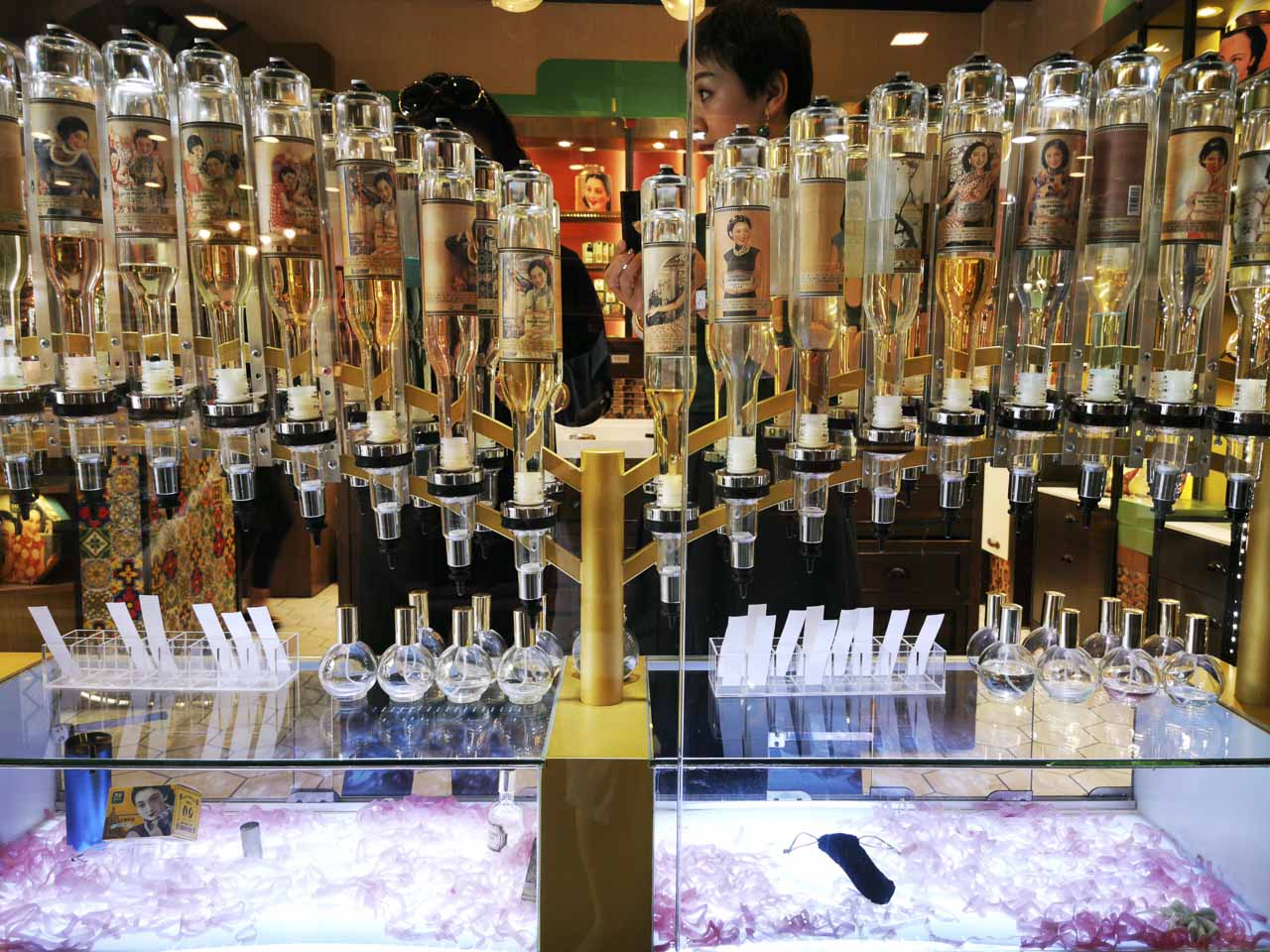 The Yu Garden has a shopping complex in front filled with places to buy Chinese souvenirs, and taste authentic Shanghai Dumplings.

The complex is designed as a traditional Chinese Bazaar with a maze of old laneways and alleyways.

This is a great place to grab your souvenirs.